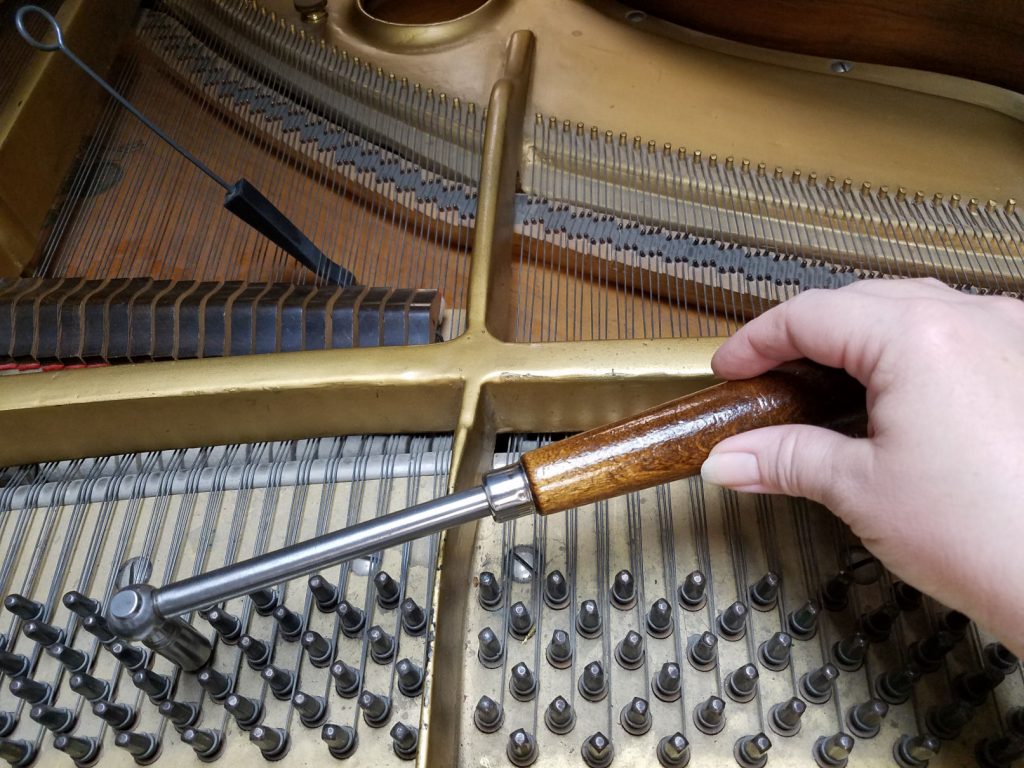 Perhaps you’ve heard the line, “You can ‘tuna’ piano, but you can’t tuna fish!”

Well, I was tuning another piano just yesterday, and ran into what I often experience: stubborn strings. These are the strings that move or slip out of place after being tuned, often several times. They require a lot more time and effort than a string that “tunes” quickly and stays in place.

Today, I had at least three strings that required adjusting multiple times. I’d have to move the rubber mute over again, check the new tuning against the octaves (other notes like it; i.e., playing two C’s together) to make sure, once again, that they matched. A perfect octave tuning won’t “vibrate”, meaning they each sound exactly the same pitch, because they’re on the same wavelength. Everything is where it should be, and sounds beautiful… unless and until it moves out of place again.

In the case of these stubborn boogers, they would move out of place – almost immediately, proving very time-consuming and frustrating for the tuner (me, in this case).

As if things weren’t bad enough, this particular piano was the first one I’d tuned since my carpel tunnel surgeries on both hands a few weeks ago. It was already painful to tune a piano, and exceptionally difficult having to do some of them over and over again.  After about the fifth time, I vowed to get it perfect one more time, then go on with my tuning — whatever happened.

Some strings are just too brittle, usually from long-term neglect (lack of regular tunings), abuse, and/or environmental conditions. Brittle strings often break instead of stretching, as a “healthy” string would do. Often they’re coated in rust, and the first hint of moving and stretching causes immediate breaking. They just don’t want to budge, and they refuse to surrender to the will of the tuning hammer… so they’re useless.

The only options are to leave that spot empty, without that string to sound, or to be replaced by a new string, which requires a long time to “re-train”, and may never sound as good as or match the exact tone of the original.

I am continually amazed at the life lessons God illuminates to me as I tune pianos all these years. I think of the many times I have been that “stubborn string”, resisting the “tuning” and correction of my loving Heavenly Father. Of course, I did similar things with my earthly parents, resenting and fighting against their efforts to enforce boundaries (which they set to protect me from bad stuff and situations), and to train me as a self-controlled, Godly young woman.

All those bad decisions, attitudes of pride, deception, lying to my dad (as a teenager), sexual sin, and rebellion certainly caused frustration and heartache to my parents. I’m sure after so many attempts, my dad (who was married to my second stepmom by this time) must have thrown up his hands in despair. It’s like that stubborn string that kept going out of tune even after five attempts to tune it.

I’m so thankful that God has more patience and mercy than we humans! He instructed the disciples (and that includes us, His modern-day followers) to forgive each other, “seventy times seven”, or an innumerable amount of times. God forgives us that way! We only have to ask, with a sincere heart.

[bctt tweet=”SO good to know! If we confess our sins, He is faithful and just to forgive us our sins and cleanse us from all unrighteousness. 1st John 1:9 #inspiringhopeblog” username=”becky_wright”]

I am eternally grateful that I am FORGIVEN and CLEAN before God. I am in awe of His mercy, for all the times He’s saved me from certain death, physical harm, and for steering me away from situations that were designed by Satan to destroy me! I praise the name of Jesus for giving this “stubborn string” countless chances to “tune up” under His gentle and patient hand. And, just like a piano, we each need regular tunings to function properly and to experience that “abundant life” that our Creator designed us to have.

My pride has been broken numerous times, as has my heart. As a result of my own sin, or often the actions of others or unforeseeable circumstances, I have been stretched, bent, and sometimes crushed with grief. These were all necessary, however, for the refining process (which is ongoing), to keep my heart pliable and sensitive to the voice of the Holy Spirit.

I want to be used by God to make an eternal difference in the world, beginning with my own family, people I know, and extending to people around the world.

I want to be in unison and harmoniously united with others who have the same desire, in my family, in my church, and in God’s family worldwide. That only happens when we are teachable, flexible, “tune-able”.

Question: Can you share an instance of God “tuning” an area of your life? Were you “brittle” or pliable in that occasion? Share what you’d like in the comments below!